Today, we are gonna visit the most famous place in the world Agra.

Seriously guys Agra is one of the favourite places of mine . There are so many amazing places to visit in Agra like the Taj Mahal , Agra fort, Fatehpur Sikri, Mariam tomb , Akbar tomb, etc.

First of all we are going to see this beautiful architecture call Taj Mahal. One of the 7th wonder of the world. Beautiful entry pathway beside the reflecting pool with fountains up to the mausoleum crafted soft and pure marble and jewellery with semi precious stones, where in the serenity of Paradise rest queen in the peace with her King. Taj Mahal built by emperor Shah Jahan for his favourite wife Mumtaz. That is why it’s called Mumtaj Mahal or Taj Mahal.

The sprinkling of fascinating Tom and mausoleums , and there is also fun to be had in the bustling chalks on marketplace. The downside comes in the form of Amazing horse rides, and so many tourist guides. Agra straddles a large Bank along the holy Yamuna river. The fort and the Taj are only two kilometre apart. The main bus and train stations are a few kilometres southwest.

Whenever you think about visiting Agra. The first comes in your mind is this the “Taj Mahal”. The symbol of love, “love for eternity” just look at this beautiful architecture. One of the 7th wonders of the world.

Queen Mumtaz was died during giving birth to their 14th child. The death of Mumtaz left the imperor so heartbroken that his hair said to have turned grey virtually overnight. Construction of Taj begin the following year. It took 8 long years to complete the main building.

After it was finished Shah Jahan was overthrown by his son Aurangzeb and imprisoned in Agra fort. Where for the rest of his days he could only look out at his creation through a window. Following his death in 1666, Shah Jahan was buried here alongside his beloved Mumtaj.

20,000 people from India and Central Asia worked on the building. The taj mahal itself stands on a raised marble platform at the northern end of the ornamental gardens, with it’s back to the Yamuna river. 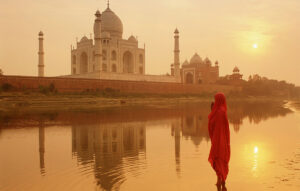 A master stroke of design purely decorative 40 metre hai white minarets grace each corner of the platform. The red sandstone mosque to the west is an important gathering place for Agra Muslims. The identical building to the east “the jawab”, was built for symmetry. 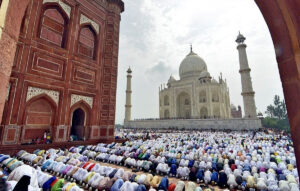 The central Taj structure is made of semi translucent white marble, carve with flour and inlaid with thousand of semi precious stone is beautiful patterns. The real tombs of Mumtaz and Shah Jahan are in a basement room below the main chamber.

The Taj Mahal is considered to be the greatest architectural achievement in the world range of Indo Islamic architecture. The uniqueness of Taj Mahal lies in some truly remarkable innovation carried out by the holy culture planners and architects of Shah Jahan. One such genius planning is the placing of Tom at one end of the quadripartite garden rather than in the exact centre which added rich depth and prospective to the distance view of monument. 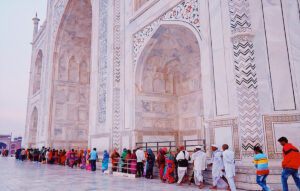 The purity of the white marble, the execute ornamentation, precious gemstones used and its picturesque location all make a visit to the Taj Mahal gain a place amongst the most sought-after tours in the world.

However, until you know the love story behind the construction of Taj Mahal, the beauty of the same would not enliven in your heart and mind and instead would come up as Just another beautiful monument. It is the love behind this outstanding monument that has given a life to this building.

At the brink of dawn when first rays of the sun hits the dome of this Epic monument, it redicate like a heavenly adobe, cloaked in bright golden. And then at dusk, basking in the glory of moon, it shines like a perfectly carved diamond.

Appearing as if straight out some magical tale, leaving the viewers awestruck by its senses of granduer. Nothing short of an architectural marvel, no wonder it stand proud at being on of the seven wonders of the world. And the rich beauty of this visual spectacle turns visceral when one hears the story of Taj Mahal. 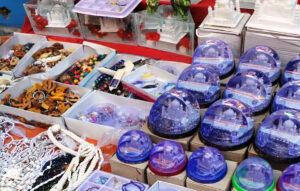 Taj Mahal, “the symbol of love is a monument of a immeasurable beauty”. The beauty of this magnificent monument is such that it is beyond the scope of words. The thoughts that come into the mind. While watching the Taj Mahal of Agra is not just its phenomenal beauty but the immense love which was reason behind the construction.

The very first sight of the Taj Mahal the epitome of love and romance. Leaves the visitor mesmerized and perpetually enthralled. If you want to know more about Taj Mahal then watch the video.

10 Best Places To Visit In Bangalore